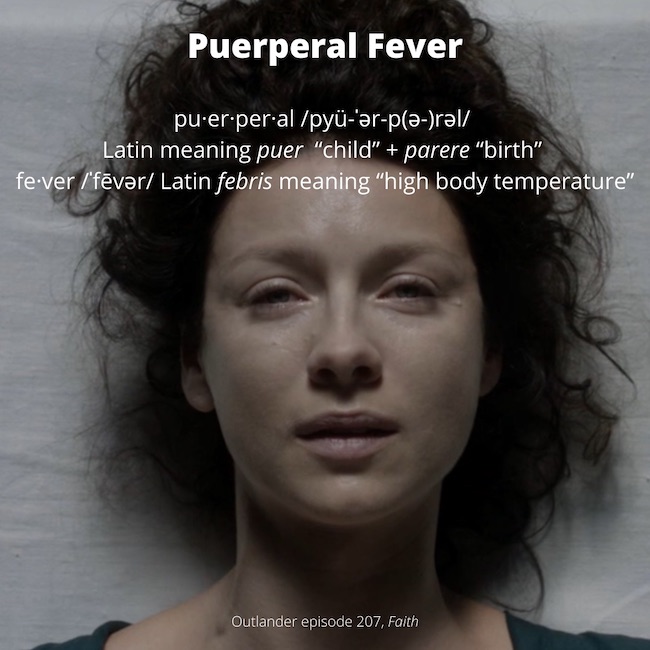 Following the devastating loss of her child, Claire becomes desperately ill. She diagnosis her illness as puerperal fever in Outlander, Episode 207, Faith.

Because L’Hopital des Anges staff lacked the knowledge to treat the condition, Claire rapidly deteriorates – that is, until Master Raymond surreptitiously heals her by the power of his hands! ✋🏻🤚🏻

Merck Manual uses the term, puerperal endometritis, literally meaning “childbirth-associated inflammation of the uterine lining.” For those who may not know, Merck Manual is Western medicine’s “bible” of diagnosis and therapy.

What Causes Puerperal Fever? The disease is caused by a bacterial infection of the upper genital tract. The bacterium, Streptococcus pyogenes, is one of the more common infectious agents, although others have been identified.

Where does the Infection Originate? The infection originates in the  upper genital tract (vagina, cervix, uterus, uterine tubes, ovaries), most often at the raw site where the placenta detaches from the uterine wall. The infection may be limited to the uterine cavity or wall, but if it reaches the blood stream, as it did with Claire, it causes septicemia/septicaemia or blood poisoning!

What are the Symptoms? Signs and symptoms usually include the following:

First Description: Amazingly, this disease has been recognized over several millennia – its description first appeared in the Hippocratic Corpus, a compendium of medical treatises dating to the fifth century B.C.E.! 😲 Still, the term, “puerperal fever” did not appear in the historical record until the early 18th century – just a few years before Claire experienced her unfortunate miscarriage.

How Common is it? Puerperal fever is absolutely not an affliction of the past. Although less common in today’s Western countries, puerperal fever afflicts some 5,000,000 women worldwide, causing the deaths of about 75,000!

Can it be Treated? Indeed, puerperal fever can be treated! Since antibiotics were discovered in the 1930s, death from puerperal fever has diminished, dramatically. Today, mild disease is treated with oral antibiotics;  intravenous antibiotics are recommended for more serious cases. Caesarean section typically calls for preventative doses of antibiotics to be administered around the time of surgery. Ergo, the outlook is much better these days, except in low-income countries where puerperal fever and subsequent death persists.

A Bit of History: Childbirth infections were a common cause of death during the 18th Century when Claire was a patient at L’Hopital des Anges. Louis Pasteur (1820-1895) had not developed the Germ theory, so physicians of earlier eras did not know that pathogens could cause diseases such as puerperal fever. Twentieth-century Claire knew the cause but was too ill to effect a remedy, even if one were available.

For years Western physicians engaged in heated debates as to the cause of puerperal fever (bad humors, miasmas, etc.).  Decades passed. Then, in 1847,  Hungarian physician Ignaz Semmelweiss  headed the First Obstetrical Clinic of Vienna. He discovered that puerperal fever could be prevented if strict rules of hygiene and cleanliness were enacted. These efforts reduced puerperal fever related-death on his ward from 20 to less than two percent! 👏🏻👏🏻👏🏻

After bringing the disease under control, Semmelweiss courageously recorded this admission:

“Puerperal fever is caused by conveyance to the pregnant woman of putrid particles derived from living organisms, through the agency of the examining fingers……. Consequently must I make my confession that God only knows the number of women whom I have consigned prematurely to the grave.”

For these heroic efforts, his colleagues destroyed his reputation. He died in an asylum from a gangrenous wound to his hand, probably caused from a beating administered by his guards. He was 47. 😔

Learn about fever in Anatomy Lesson #37, Outlander Owies, Part 3. Briefly summarized, fever is a fascinating but complicated bodily response to infection and disease. I hope you take time to learn a wee bit more about it.

My body felt bruised and tender, as though I had been beaten. My joints ached and felt loose, like teeth undermined by scurvy. Several thick blankets covered me, but they could do no more than trap heat, and I had none to save. The chill of the rainy dawn had settled in my bones.

All these physical symptoms I noted objectively, as though they belonged to someone else; otherwise I felt nothing. The small, cold, logical center of my brain was still there, but the envelope of feeling through which its utterances were usually filtered was gone; dead, or paralyzed, or simply no longer there. I neither knew nor cared. I had been in L’Hôpital des Anges for five days.

… Mother Hildegarde’s long fingers probed in relentless gentleness through the cotton of the bedgown I wore, probing the depths of my belly, seeking the hard edges of a contracting uterus. The flesh was soft as ripe fruit, though, and tender beneath her fingers. I winced as her fingers sank deep, and she frowned, muttering something under her breath that might have been a prayer.

The fingers had returned to their work, probing the crease of my groin in search of the lumps of enlarged lymph nodes that would signal infection. They were there, I knew; I had felt them myself, moving my hands in restless misery over my empty body. I could feel the fever, an ache and a chill deep in my bones, that would burst into flame when it reached the surface of my skin.

…  I slept, eventually. And I dreamed. Fever dreams of weariness and desolation, of an impossible task done endlessly. Unceasing painful effort, carried out in a stony, barren place. Of thick gray fog, through which loss pursued me like a demon in the mist. I woke, quite suddenly, to find that Bouton was gone, but I was not alone. Raymond’s hairline was completely level, a flat line drawn across the wide brow as though with a level.

… The shiver came back; it was as though the heat passed from me to him, but his hands did not warm. His fingers stayed cool, and I chilled and shook as the fever ebbed and flowed, draining from my bones.

Yikes! I almost forgot! I got into William Shatner’s one-man panel. It was excellent. Captain Kirk was entertaining, thoughtful, and funny.

i hope you stay with the video until a baby in the audience begins to fuss. Mr. Shatner’s response might surprise you! It certainly did me.  Very touching.

Like others, his experience of going into space allowed him to view this beautiful blue orb we call home. He waxes philosophically about our future.

Murtagh! He received a warm welcome from Outlander fans! 🤗

Just got out of his event and off to the airport.

Here is Duncan. He was wonderful.  Enjoy!